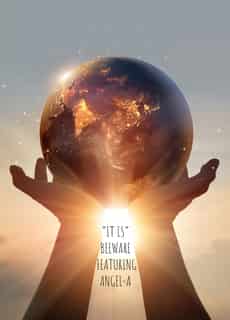 Rebelling against the popular trend doesn’t get you very far in the music business, and while there’s value in going your own way, I think it’s important to stick with a model people can – for the most part – relate to, especially in aesthetically progressive genres like hip-hop. Beeware knows this, and in his new single “It Is,” he makes it clear to his fans that his main priority in the studio is taking the pop concepts of now and transforming them into something futuristic. His new single “It Is,” he joins forces with Angel-A for a twist on melodic hip-hop that veers away from the alternative just enough to feel like an instant classic.

Beeware’s vocal oozes from the speakers rather than cutting through the low-end tones in the background, and though this isn’t what a lot of rappers would have done, I like what it sets up for the hook. There’s a melodic crossover between the verses and the virtuosity of the arrangement, and scarcely does it ever feel like the charisma in this single is manufactured or inorganic. That’s a step up from some of the content I’ve heard hyped on the mainstream end of hip-hop, as well as a lot of this player’s underground peers.

The harmonies that Angel-A creates in the climax of “It Is” feel a little funky in spots, almost like she’s bridging the gap between retro and realism in a way that only a soulful, funk-inspired singer could. There’s nothing wrong with hybridity when it’s resulting in a balanced piece of music like this, and I’ll say now that Beeware is doing a good job of setting an example for how some of his younger peers in the game should be making music that fuses different influences together in one sound.

There’s nothing generic about “It Is” nor the two artists bringing it to life this November, and if you haven’t already taken some time to give it a spin, it would definitely be a good idea to this winter. Beeware has swagger, and he earns it with the skillset that he brings forth in this performance, and though I only just recently started listening to his music, my gut tells me that there’s going to be a lot of interest in where he’s taking his style if this single is representative of what he’s trying to do with hip-hop. Angel-A should do something with him in the future, and I overall hope to see both of them experimenting with their limits as much as possible.