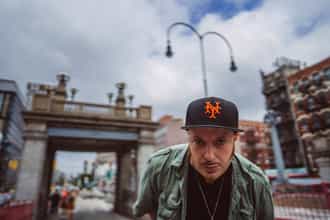 Hip-hop’s dark side is often its most surreal, and Uncommon Nasa isn’t content to leave this end of the genre unexplored in his new single “Brooklyn Soup” and the song’s accompanying music video. Rather than giving us his linguistic prowess exclusively, Uncommon Nasa stacks postmodern layers atop his verses that seem to circle us like a shark zeroing in on its prey. There’s a feeling of danger that follows us across every beat in this track, and our leading man undeniably embraces this feeling with the kind of confidence normally reserved for only the most elite in mainstream hip-hop today.

Uncommon Nasa unleashes on us lyrically in “Brooklyn Soup,” but I don’t think he’s going out of his way to be especially poetic in his statements. There’s something really assaultive about his demeanor like he’s prepared to do whatever it takes to get his point across whether that means leaning on his voice or the virtuosity of the arrangement he’s cultivating, but it never comes to blows. He’s in control of the tempo here with his rapping, and never reliant on a synthetic backdrop to create an atmosphere that both he and the listeners are able to connect with and through.

There’s no getting around it – this master mix is pretty noisy and rough n’ tumble compared to what the cloud rap community has been playing with in 2021, but it’s a necessary evil that Uncommon Nasa exploits all too perfectly. He could have gone squeaky clean with the hook, but personally, I feel like that would have eliminated a lot of the tension that the edgy style of mix we find here dictates. Call it DIY, but there’s absolutely nothing amateurish about this single – if it makes you uneasy, then its moodiness is most definitely on-point.

If this is just a taste of what’s still to come from Uncommon Nasa in the future, I think he’s going to get out of the underground and into the primetime a lot easier than some of the other players coming through his scene will. “Brooklyn Soup” has all the makings of a breakthrough single and music video, but even if it takes a minute to get this rapper’s sound into the international hip-hop circuit, my gut tells me that once he has his foot in the door, it’s going to be difficult getting his name off of the headlines at home and abroad.