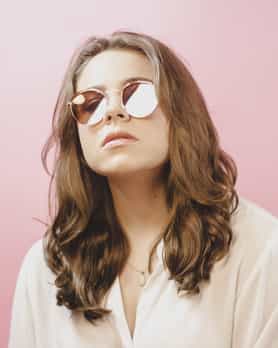 Indie rock is led by the brazen ones; the players who aren’t willing to stand down from a challenge or blend in with the crowd, and from the looks of her new single “Sweet Like Candy,” Cat Ridgeway is definitely one of these players. “Sweet Like Candy” plays with a swinging groove that hits hard but recoils just as quickly, and while its beats are what initially attracted me to its core, I don’t know that I would be jamming to this track nearly as much as I am this holiday season were Ridgeway’s sleek vocal not tucked away in the heart of the harmonies.

I can’t get enough of a sweet hook when I come across one, and listeners of a discriminating taste needn’t worry about running into saccharinity in this performance. Despite the title, “Sweet Like Candy” doesn’t have the plasticized theatrics that a lot of similarly melodic pop tracks do. Its groove is old-fashioned – though not to a fault – and its harmonies twist with the rhythm of the drums, which allows for Ridgeway to own the spotlight with the microphone in her hands like no one else could have for this specific song.

The guitar parts here are really warm and draw us closer to the melody rather than simply buffering the horns and the bassline, and I really dig the glow of this instrumental arrangement in general. It’s obvious to me when an artist is putting in the blood, sweat, and tears that the up-and-comers with sights set on a lower bar just don’t think about contributing, and for all intents and purposes, I don’t believe that Cat Ridgeway has ever shortchanged her audience on this front. She’s got a lot of soul, and that’s playing a part in this track for sure.

As much as I love the sound that this player is rocking in her latest single, I have a strong feeling that “Sweet Like Candy” would sound even more exciting and endearing on the stage. Cat Ridgeway is the type of singer who blossoms when she’s got all eyes on her, and if there’s anything that we can learn from the exuberant performance that she puts on in this single, it’s that she isn’t anywhere near hitting her peak – if anything, she’s still on the come-up and making it clear how committed to waging war on the mundanity in pop she really is.