“Say Nothing” from Flume (feat. May-A) 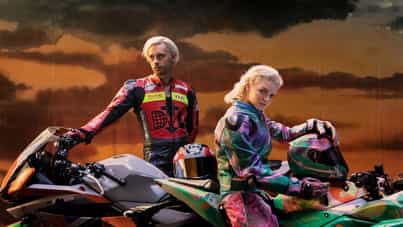 Although it features a heartily synthesized melody at the center of its arrangement, the new single “Say Nothing” from Flume and May-A doesn’t sound inorganic in the least. This is largely because of the vocal charisma its two stars offer from behind the mic, but even relative to some of the other clubby pop music I’ve been spinning this March, there’s something a lot warmer and truer to the artistic ideals of alternative music in this single than there are any of the others to land on my desk lately. Flume delivers the provocative goods here, and he picked the right collaborator to do it with.

I liked this song the first time that I listened to it, but I don’t think I was really putting it together as a complete narrative piece until I saw the music video Flume and May-A recorded for it. It’s not quite the familiar psychedelia that we see some of their contemporaries playing with this spring, but there’s definitely a surreal bend to every part of the visual scheme for “Say Nothing” that makes me very curious to see what these two artists might be able to create together in an entire album as opposed to a single/video combo alone.

Aside from having one of the most engaging visualizers I’ve stumbled across outside of the hip-hop underground in the past six months plus, the compositional craftsmanship in “Say Nothing” is just too erudite to be ignored. The amount of focus that my man Flume is lending this piece is exceptional, but it’s alongside May-A that he gives up some of the very best harmonies of his career to date. I want them working together again for sure, if not immediately on a proper club remix of “Say Nothing,” and I think other critics around the underground in Australia and the U.S. are likely to agree with me.