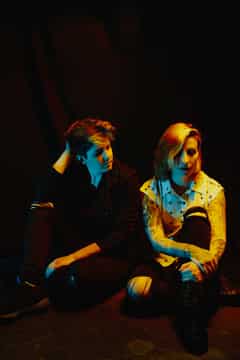 The concept for Goldthread’s new single and music video “Tiffany Skylight” is pretty simple – push each other as much as possible to get the most dynamic effect out of the music. All the familiar rock n’ roll ingredients have been included in this recipe for rhythm-centric heavy music, but without the energy that these players are nudging each other forth with, “Tiffany Skylight” likely wouldn’t sound like the hard-hitting piece it is here. This is perhaps among the most cohesive rock singles I’ve heard lately, and it demands a reaction almost every time I sit down with it.

Goldthread might have fears the same as any of us – clowns, spiders, heights, what have you – but one thing that isn’t on that list is sonic brawn, which they straddle with quite a bit of ease in this track. Although the mix mutes the guitar’s oomph a little more than I would normally like, I can understand where this was somewhat necessary to reduce the thrashing of the rhythm just enough to avoid aesthetical overindulgence. These are undeniably intellectual musicians, and how they present in this performance tells me that they’ve only gotten started experimenting with how far they can go together.

I’d love to hear Goldthread play live at some point, and judging from the potency of their performing in the music video for “Tiffany Skylight,” I highly doubt any of their concerts would disappoint. This is, after all, an era in alternative rock that has been overwhelmingly dominated by those who are willing and ready to think outside of the box when it comes to making a spellbinding harmony the center of a release, and to me, what Goldthread is doing in this most recent studio work affirms their importance in an upcoming indie revolt certain to bring mundane rock back to its knees.