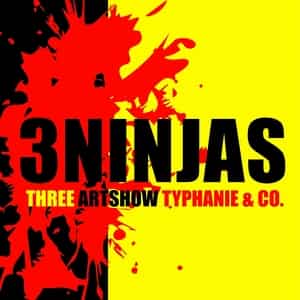 Danger is all around in the new music video for XIIDC’s new single “3 Ninjas,” and I’m not talking about the visual setup alone. There’s an ominousness shadowing the verses that Artshow, Spell the Three and Typhanie & Co. are giving up in this performance, like a night stalker creeping behind us in the shadows, and yet there isn’t a drop of intimidation affecting the performance of these three rappers. They’re quite well selected for this collaboration, but as we’ve been seeing more and more in hip-hop this year, rap is becoming a genre dominated by chemistry far more than it is excessive swagger.

For example, these players are never competing for the spotlight in “3 Ninjas,” but instead feeding into a collective aesthetical theme that’s outlined in the opening bars of the song. To me, Artshow and Spell the Three set the stage for Typhanie & Co. to drive the climax home here, and without the other two, there isn’t one rapper in this mix that could carry the weight of this hook. This is a performance that’s all about repping something bigger than yourself, and each of these three talented artists is able to convey that in one way or another.

I really like that XIIDC is using the whole studio as a means to express something to the audience in this single and its music video, and I think a lot of other rappers could learn something from the attack this trio has in “3 Ninjas.” There’s still a lot of ground for all three of them to cover on their own, but I love the potential for another collaboration between them in the future. This is hip-hop that doesn’t need a pop hook to grab our attention, and it’s made me more curious about XIIDC this spring.