Punk Goes the Velvet by Jupiter in Velvet 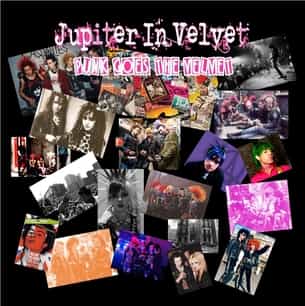 With a hip-thrusting groove to lead the way alongside a muddy guitar riff straight off of classic punk vinyl, Jupiter in Velvet’s “Dimestore Suave” rips through the silence ready to pulverize just about anything that comes between its beat and the audience. There’s an aggression to this song, and really all five that you’ll find in the tracklist of the new record Punk Goes the Velvet, that makes the urgency of the lyrics even more difficult to avoid, and even at moderate volumes, it pushes out more of a wallop than most of the mainstream rock to climb the charts in recent months.

In Punk Goes the Velvet, Jupiter in Velvet introduces the world to a primitive, relentlessly chest-beating side of his artistry that might not have been as obvious to the casual listener in his previous releases, and though he hasn’t entirely abandoned a lot of the pop influences that set up previous hits, they’re repackaged in this EP to be as incendiary as possible. Whether it’s the controlled but crunchy “Dimestore Suave” or the yearning “Get Out,” there’s something here that will have your heart racing with every rhythmic eruption.

“Not Again,” compositionally speaking, is the most straightforward punk rock song on the record, but while it follows the blueprint of the Ramones precisely – and arguably to a fault – it doesn’t necessarily vault any of the same narrative concepts in our direction at all. Actually, I think this is a pretty self-aware EP, especially taking in account the fact that it doesn’t appear to have been stylized with the purpose of discussing anything intimate (at least on the surface).

It’s only when we dig deeper into the multi-interpretive premise of “And so the Earth Stood Still” that we’re able to understand and completely appreciate the emotionality Jupiter in Velvet is trying to disclose to the listeners here. If you thought you were getting a genre-specific throwback record in Punk Goes the Velvet, you’d better think again – its composer, it would appear to me, has a much loftier set of goals than some of his more pedestrian competition in the underground can compete with.

I got into music on the strength of darkly ironic songwriting in the vein of Joy Division, and though you could debate whether or not a track like “Please Don’t Ever Let Me Go” successfully evolves the essence of that source material or not, I think it’s a brooding take on just how far alternative music has grown and developed at the hands of truly independent forces like Jupiter in Velvet in the last forty-five years.

A long time has passed since the first wave of leather jacket and ripped jeans-clad punks made their mark on the world – and forever changed the way fans and critics would analyze the rock n’ roll genre in general – but artists like this one are doing an amazing job of keeping the spirit of its creation alive in all of the work they’re submitting in 2020. Punk Goes the Velvet might be the first certifiable release of its kind in the Jupiter in Velvet discography, but to some degree, it merely magnifies a component of his sound that’s always been present.