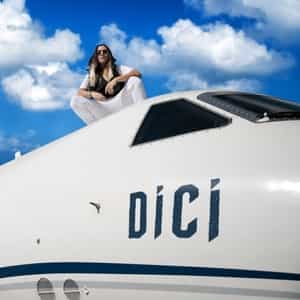 DICI is on the scene with his debut self-titled EP. His multi-dimensional, multi-cultural influences are imbued into these rap tracks. Born and raised in Milan, Italy to an American father and Japanese mother, DICI is now living in Miami, Florida. DICI also recruits producer Guiseppe D, a New Yorker for these stunning songs. Imagine being 17 and having the tools to convey your innermost thoughts, as well as find the words and phrases that most men twice his age wish they could reveal to the world. Now imagine you have at your fingertips the tools and mechanisms to create those visionary sounds – well, you’re closer to being DICI.

At the very least, listeners will get a grasp at a young man with an astute ear for beats and rhythms that percolate at the most opportune of moments. DICI drops the beat and levels up in the opener “4Door”. With nods to getting high amongst other planets, DICI keeps the out-of-this-world rhythms spread amongst the stars. Like a solid game of pong, the beat drills itself into the listener’s mind, all the while DICI himself raps with confidence and a realistic tone. He’s conversational and he’s actually quite likable. His voice echoes like a man on a mission, and like the mixtape that you’ve been waiting to hear.

“Vector” and “305 Interlude” continue the tales and further move along with the storylines. These songs are not connected on a narrative level, but they have embellished gems. In “Vector” DICI presents a keen, almost majestic piano beat entangled with his cocky lyricism. In his way, he endears himself to the audience, with the listener easily taking on these words as their own badge of honor. “305 Interlude” has a great vibe, a triumph in lackadaisical beats and tropic tropes.

The last two tracks, “Bar For Bar” and the city-scape “Shibuya” are achievements in furthering DICI’s human connection. He excels when he’s behind the computer and music board – a champion at the Pro Tools, but he elevates his music and his art when he puts his own stamp of lyricism into these tracks. It’s songs like these last two that cement DICI’s place as a clever rapper and lyricist, but more importantly as an artist with a unique lens to view life itself. He makes the listener feel like they are taking a walk in his shoes like they are visiting his life for the day.

For those listeners that find it difficult to connect with rap music, DICI is the exception. Even if you’re a seasoned rap and hip hop fan, this is going to surprise you. I think, too, pop music fans should take a chance on DICI. He really has a way of unleashing motivating lyrics, cheeky or sultry lines as well as matter-of-fact statements. Take it in, breathe it in – it’s all there. DICI is the real deal and let’s hope this isn’t the first and last we’ve heard of this young talent. DICI is one of those sleeper collections that can and should rise to the top.