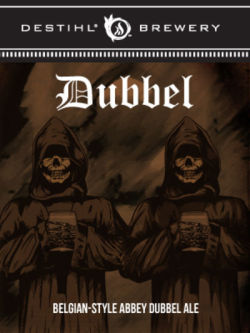 Illinois’ own Destihl Brewery has created a dubbel that hits all of the high notes of the Belgian style without moving too far into the pruny tastes that sink many a dubbel. The beer pours with a brown to mahogany coloration and a small amount of off-white head that rapidly dissipates. The initial nose of this Dubbel is sweet, heavy with raisin. and concludes with a bit of malt at the end. The initial sip hides the higher (7.5%) ABV perfectly, instead putting a first foot forward that hits imbibers with dark fruit, toffee, and malt elements. A smaller bit of grain can be discerned at points here. 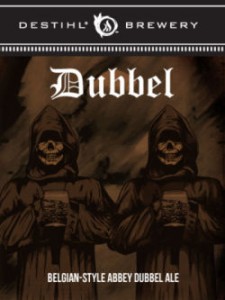 As the dubbel continues to warm, notes of spice, plum, and banana all reach prominence.  Strong hints of caramel and malt elements are the threads that unite the disparate set of flavors that one will experience during a 500 mL bottle of the brew.

The dubbel would do well paired with cuisine that has a strong/distinct profile (Indian/Mexican), roasts, and nutty cheeses. As the temperuatures continue to dip into something resembling a proper winter, the warmth imparted to an imbiber by Destihl’s Dubbel will be much appreciate. The steady set of flavors that one will experience here is surprising for the style, which oftentimes breaks down into something that is overly–sweet and without a guiding direction. Destihl’s Dubbel is a high-water point for the style, something that is interesting enough to keep one interested from beginning to end.

We have reviewed a number of Destihl efforts in the past, including Vertex IPA and Abbey’s Single, as well as three efforts from their Wild Sour Series, the Lynnbrook Raspberry Sour Ale,  Here Gose Nothin’ and  Counter Clockweisse in NeuFutur. Keep an eye on NeuFutur Beer for coverage of Antiquity Rye Wine, and St. Dekkera Reserve: Excommunie Quatre.